For the first time since 2007, the biggest game in club football, El Clasico, 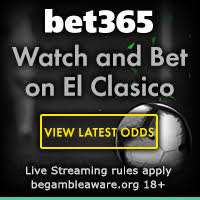 will not feature both or either of the two biggest names in world football today. Last summer Real Madrid sold Cristiano Ronaldo to Serie A side Juventus for around £90m, while just a short while back, Barcelona’s own genius, Lionel Messi, injured his arm, an injury which looks set to rule him out for three weeks.

The net result is an El Clasico on Sunday which promises to be one of the most intriguing in recent times. Both Barcelona and Real Madrid are a much-changed team from last season and both have not started the current campaign in the dominant form that they have in previous years. Indeed, in all competitions, Real Madrid have already lost five games this season, while Barcelona have also been beaten once in La Liga after nine games thus far.

As always, it is a huge game for betting fans and you can enjoy all the action on the match this Sunday afternoon (kick off around 3.15pm UK Time) with bet365 Sport. If you are not yet a customer, then you can join up today using the latest bet365 Sport New Customer Offer to help you get a better value deal.

In this article, we are going to preview how the season has gone so far for both teams, the latest predicted line ups for each and also give you our top tips for the game itself, including what we think are the best bets to make on El Clasico with bet365 Sport.

Let’s begin with the team that are currently top of La Liga, Barcelona and how their season has progressed so far.

Barcelona – The Story so Far

Over their opening six games of the season, Barcelona were looking

imperious once again but after a 2-2 draw with Girona, the wheels came off a little and a run of three games without a win began. A Lionel Messi masterclass against Tottenham in the Champions League brought them victory at Wembley but they were held once again by Valencia but did follow that up with a 4-2 win over high-flying Sevilla to reclaim the top spot in the La Liga table.

Last time out, with Messi injured, Barcelona claimed an important 2-0 win over Inter Milan in the Champions League to rack up their third win in three games to put them in firm control of Group B ahead of Inter, Tottenham and PSV Eindhoven.

Real Madrid – The Story so Far

Real Madrid’s season didn’t start well with a UEFA Super Cup final defeat to city rivals Atletico in their first competitive game, however Julen Lopetegui’s team started the season with three wins in a row before they were held 1-1 in Bilbao by Atletico. Two good wins over Roma and then Espanyol got them back into form but since then it has been a huge struggle with three defeats in their last four games and their only win coming in midweek against Viktoria Plzen in the Champions League, a run of results which has heaped the pressure on the manager ahead of the game.

What is clear about La Liga this season is that Barcelona and Real Madrid are not having things all their own way. Barcelona are top, but the Catalan’s are just a point ahead of local rivals Espanyol and Alaves, while Real Madrid languish in seventh spot, four points behind Barcelona after just nine games. Real have scored ten goals fewer (13 compared to 23) than Barcelona but their defence has conceded two goals fewer too (9 compared to 11 for Barca) and this exemplifies the problematic areas for both teams so far this season.

With Messi out, I expect Rafinha to continue in place of the Argentinean with Suarez and Coutinho the others in a three-pronged Barcelona attack. Dembele could play in place of Arthur in midfield but the rest of the team pretty much selects itself in the usual 4-3-3 formation.

Will Karim Benzema start? After impressing in midweek, the Frenchman may get the nod here, which may see Asensio or even Bale miss out. Marcelo’s injury in midweek means youngster Odriozola, a summer signing from Real Sociedad, could play in his place. Real will also operate in a 4-3-3 formation. 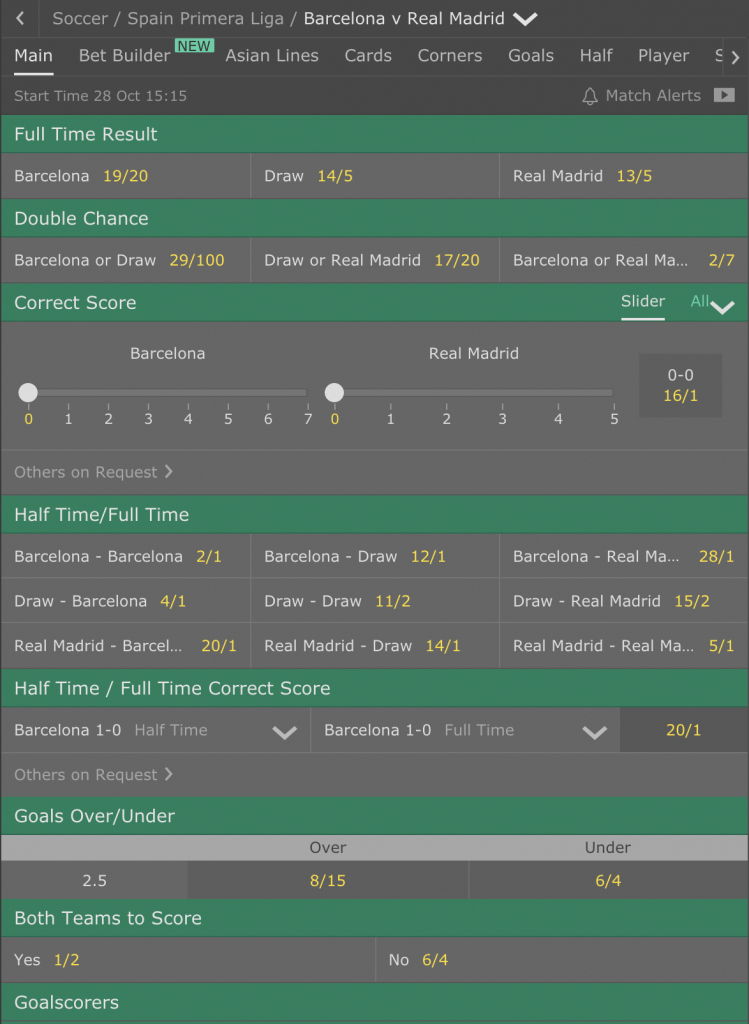 It’s hard to make too much of a case for Real Madrid here given their recent form, or lack of it, and it may well be the absence of Messi for Barcelona which gives the vistors a chance of winning. With confidence ebbing away and Marcelo a big miss for Real, I fancy Barcelona with home advantage and even without Messi to get the job done here.

In terms of the correct score, Real’s strength is defensive and with Messi missing, I can’t see Barcelona scoring three or four goals here. I can see them grabbing a couple. With Real misfiring in attack but Barcelona’s defence so porous, I can see Real netting one goal here, hence I think the 15/2 on a 2-1 scoreline makes the most sense.

Who Wins the Three Divisions of the Football League and the Community Shield?